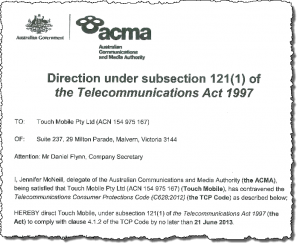 Two Victorian telcos have drawn fire from ACMA for failing to publish Critical Information Summaries as required by the 2012 TCP Code.  The Authority today announced it had issued a formal ‘direction to comply’ to each of them.

A ‘direction’ is ACMA’s way of cocking its enforcement gun.  It isn’t a penalty in itself but a breach of the direction allows ACMA to apply to the Federal Court for a penalty to be imposed … up to $250,000 for each contravention.  But interestingly, although the directions were both dated 23 May 2013, and required compliance by 21 June 2013, we still can’t find CIS statements on either site.

The telcos concerned are Touch Mobile and Jadi 1 Pty Ltd (which trades as Natcom IT&T, according to TIO records).

In Natcom’s case, it may be that the only products they offered that required a CIS were its call plans, and these have disappeared from its website.  That might explain why the company hasn’t published any CIS. 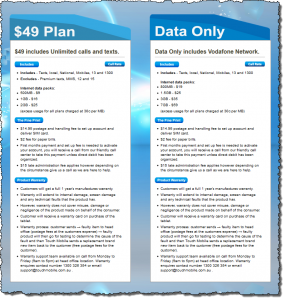 But Touch Mobile does look like it’s still offering plans that fall under the CIS rules, and if there’s a CIS on offer, we can’t find it at the date of this post.  It’s hard to see how ACMA can ignore that.

For more information about the 2012 TCP Code’s CIS rules, take a look here.

A telco lawyer with a truckload of experience
View all posts by Peter Moon →
This entry was posted in Code Enforcement, Critical Information Summary and tagged ACMA, CIS, enforcement. Bookmark the permalink.