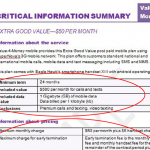 The Australian Communications and Media Authority has, as you’d expect, posted a news item on its website about the TCP Code rules that came into force on 1 March 2013. The post is a good example of something that is true, but still potentially misleading.

The article must have been written by a media writer, not a lawyer or bureaucrat, because it sensibly includes a ‘for instance’ of a Critical Information Summary. (The lawyers and bureaucrats have conspicuously not done that since the TCP Code was registered six months earlier.)

The example will be very helpful to many telcos, who have had difficulty visualising what sort of thing the TCP Code might require. The ACMA document is just an example, but it would have been great if it had been available a few months ago, and not in the final hours before CIS statements became compulsory.

One thing it makes clear is that we were very right when we posted that CIS statements should be as short and sweet as possible, without rabbiting on and filling up the allowed two pages for the sake of it.

But the sample CIS needs to be treated with care

If you know anything about telcos, you’ll know that when it comes to legal documents:

They reckon, ‘If that’s how Larry or Michael or David do it on their websites, it’s got to be OK for us.’  When ACMA publishes a sample CIS, it’s bound to be taken as gospel … which it is for the particular imaginary mobile plan it relates to.

But for a plan that was different in one of several ways, the sample would not be adequate.  Mobile service providers can’t just ‘search and replace’ to successfully adapt the ACMA document for their business.  It’s the important rule we’ve talked about before:  To write a CIS, you need to use the list of requirements in the TCP Code as your benchmark, not another CIS — no matter who prepared it.

It would be good if the sample CIS was labelled with a ‘disclaimer’ that very clearly made that point.  Even though the article may have been aimed more at the general public, the document is sure to spread far and wide in the industry (it is from ACMA after all) and without that clear warning, some telcos will treat it as a genuine template instead of a useful but particular and hypothetical sample.

There’s an issue around billing requirements, too

Or maybe the author just made a mistake.  We’re all human:-).

A telco lawyer with a truckload of experience
View all posts by Peter Moon →
This entry was posted in Billing, Critical Information Summary. Bookmark the permalink.