TCPCode.com.au has paid some attention this week to early instances of the ‘CIS’ or ‘Critical Information Summary’ statements that all telcos must publish for their offers by March 2013.  It turns out that CIS’s sound an alert when a telco is likely to breach the national unfair contract terms law, when it comes to Early Termination Fees (ETF).

In a nutshell (except in very particular and probably rare circumstances) an ETF can’t simply be the sum of all remaining contract charges, typically expressed as ‘remaining months in contract times monthly plan fee’.  You must at least give the customer credit for the savings you’ll make by not actually having to give them any more service.  Otherwise, the service provider is getting an unfair windfall.

There aren’t a whole lot out there right now, because CIS’s are not compulsory until 1 March 2013.  We found a sample of seven.  Four of them indicated that the ETF was the full monthly fee multiplied by contract months remaining.

The minimum term here is 12 months, so ETF is actually $50 higher than total contract charges!

Based on this provider’s 24 month contract term, this is another case of “Max ETF = Full Fees”. 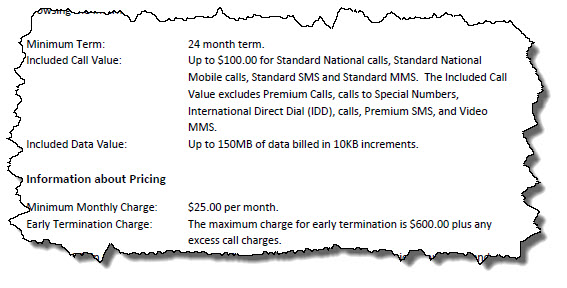 In each case, we have assumed that the ETF as calculated at any time during the contract uses the same formula that’s been used to calculate the maximum ETF quoted in the CIS statement.  Hypothetically, a telco might use one formula for the maximum but another one for calculating the figure after the first month of the contract.  We all know that’s unlikely, but to be fair we can’t rule it out as a logical possibility.

Likewise, there could conceivably be a plan pricing structure where a telco wasn’t making any profit on the minimum monthly charge, and so might reasonably calculate ETF based on the full amount.

What’s it add up to?

The point is that one cannot be 100% certain that each of the CIS figures above necessarily indicates a breach of the unfair contract terms law.  But it is just very likely that most of them are illegal.

Consumer Affairs Victoria released a very good resource paper on the topic of legal and illegal ETFs in 2010.  If you want a detailed analysis of what’s allowable and what’s not, it’s a good starting point.

Is this a big deal?

We think it is.  Apart from the fact that ETFs calculated like the ones above are a bugbear for consumers, they are likely to be illegal, and ACCC can’t turn a blind eye to that.  When every telco is forced to go very public on its ETF calculations – via its CIS statements – it will be instantly obvious who is probably breaking the law.

We’ll be advising our clients to review their ETF calculations before they release any CIS’s.