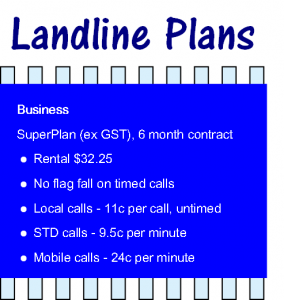 It’s worth remembering three things about the TCP Code and its relationship with other laws.  And that they put extra pressure on the often dangerous practice of advertising business plans ex-GST, unless you know exactly what you’re doing.

We’ll explain why the ex-GST business pricing on the left is illegal shortly. First, let’s see what the TCP Code has to do with it.

As telcos should know, section 48 of the Australian Consumer Law requires prominent GST-inc pricing in many cases.

The Code repeats some other laws

Second, in some cases the Code repeats parts of other laws. One example:

A telco must not advertise or promote a periodic price to be paid for a telecommunications product without also prominently displaying (but not necessarily as prominent as the periodic price) the “single price” as defined in the Competition and Consumer Act.

Price advertising in the spotlight

Third, the Code’s new rules about pricing information will shine a spotlight on plan advertising. Breaches of other laws, like the “single price” law, will be noticed more often.

So what’s the problem with ex-GST business plan pricing?

Well, it’s easiest to explain when it’s OK to advertise or quote ex-GST.

But there’s a caution about all the above.  None of them is OK if the way the price is advertised might confuse about whether it was GST inc or ex.  It’s never OK to advertise ex-GST in a confusing way.

In any other case, it’s illegal to advertise ex-GST, even for ‘business’ plans

That’s right.  If your advertisement is pitched at anyone except an ACN, and your product is fairly commonly used personally as well as in businesses, and your ad doesn’t prominently state the inc-GST price, you break the law.  It makes no difference that a particular buyer is in fact a business, and uses it for business purposes.  If the plan was eg a mobile phone, that people also often buy for non-business use, you break the law.

Consider this offer.  There’s nothing that limits it to ACNs, and anyone can view it on the provider’s website.  And a PSTN line is a classic example of a product that is used in business and in homes.  So the “single price” law definitely applies to this ad.  Yet the total plan price, inc-GST, for the 6 month minimum term isn’t stated.

The penalty for breaking this law?

Well, it could be $100,000s in a shocking case.  But so far, ACCC has been willing to fine or warn.  For instance, some restaurants have been fined $6,600 penalty notices for menus that advertised “10% surcharge on public holidays” without stating the total price that added up to.

But restaurant menu advertising is fairly limited in reach, and restaurants aren’t in the consumer protection spotlight the way telcos are.  So don’t be surprised if the regulators take a harder line with a telco.

A telco lawyer with a truckload of experience
View all posts by Peter Moon →
This entry was posted in Advertising and tagged advertisements, GST. Bookmark the permalink.