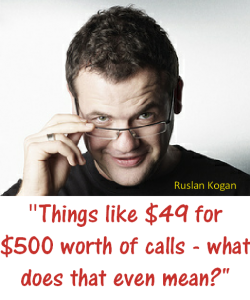 It took entrepreneur Ruslan Kogan to make a key point about telco plan pricing – a point that the new TCP Code doesn’t pick up on. Fifty dollars does not equal $500, and it’s inherently confusing to base pricing and advertising around claims that it does.

It’s such an obvious point

When we ‘legal’ telco advertising, one standard step is to ask whether each statement or representation is literally true.  Now, sometimes it isn’t a problem if they are not true.

Claims that are literally untrue can be legally OK

They can be OK if

But if no exceptions like that apply, then you’re left with a material, false and inadequately qualified / unqualified statement or representation.  And that indicates a problem.

No way.  This is put forward as a key factual selling point of this kind of plan.  There’s no possibility that the claim is meant to be taken as a bit of ‘over the top’ super salesmanship.

We don’t think so, at least in the great majority of cases.  To be effective and lawful, advertising qualifications must be so clear and obvious that a person whose eye was caught by the headline would have little or no difficulty in promptly taking in the qualification and its effect, almost as if the qualification ‘jumped out at them’.  If a reader / viewer / listener has to work to find or understand the qualification, there’s a problem.

On both tests, the “$50 = $500” kinds of plan advertising rarely, if ever, pass muster.  It’s a very potent headline claim, and would require very clear, simple and effective explanation.  Try finding that in this kind of ad.

Well understood by the market?

For this test to be satisfied, you need to ask if pretty much 100% of the audience would say, ‘I know what that claim is about, and how it works.  It’s all cool.’

We doubt that many consumers do have a clear idea of the pricing structure/s that lie behind ‘$50 = $500’ offers.  And we’re certain that the proportion that may understand it doesn’t represent pretty close to 100%.  Very large numbers of people must be very unclear as to how it works.  So it’s a ‘fail’ on this point.

So where does that leave us?

This kind of plan pricing and advertising ‘construct’ should have been banned, in conjunction with unit pricing rules.  It’s an obvious point of confusion in advertising, and will continue to be so in spite of unit pricing.

If you imagine a world where ‘$50 = $500’ advertising was banned, it would immediately mean that telcos had to use meaningful statements of plan inclusions to describe what customers will get for their $50 monthly fee.  Automatically, they would be driven to referencing how much actual service (as opposed to how many fake, ‘$1 = $10’ dollars) the $50 plan actually includes.  They’d have to say things like, ‘For $50 you can make 100 calls.’

In other words, telcos would then be pressured to advertise what you really get for your money. But as long as the law lets them scream out confusing, nonsensical headlines like $50 = $500, unit pricing will be pushing uphill.

Is the opportunity lost?

There’s still a chance for regulators to act on this inherently confusing advertising technique.  The Australian Competition and Consumer Commission has plenty of power under the Australian Consumer Law to ensure that ‘$50 = $500’ claims are either carefully explained and qualified, or not made in the first place.

A telco lawyer with a truckload of experience
View all posts by Peter Moon →
This entry was posted in Advertising, Criticising the Code, Unit Pricing Rules and tagged advertising, included value, unit pricing. Bookmark the permalink.