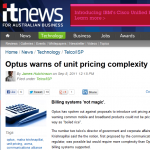 It turns out that Optus may have been right.

Telcos have made a real effort

TCPCode.com.au thinks that the industry has made a genuine effort to comply with the unit pricing rules, which came into force under the TCP Code on 27 October 2012.  But it turns out that the rules either aren’t clear enough, or haven’t been explained well enough, or maybe aren’t even appropriate, to deliver their anticipated benefits.

Serious questions remain open about what products the rules apply to, what numbers have to be stated, and whether (and how) they apply to bundles.  We’ve discussed some of these in earlier articles.  Different telcos interpret and apply the rules differently, and even the regulators may not necessarily agree on how they work, or should work.

This doesn’t mean that unit pricing is entirely ineffective or making no contribution to consumer welfare.  On the contrary, there’s plenty to be pleased about.  But unit pricing is held out as one of the new TCP Code’s central reforms, and if it isn’t working as it should in many cases, the value of the Code is significantly diminished.

As reported on iTnews.com.au last year:

And in another article, IT news reported:

The complexities suggested by the above comments are now evident in the marketplace.  And ACMA hasn’t entirely let go of the idea of quoting two prices to satisfy the unit pricing rules.

So what’s the solution? 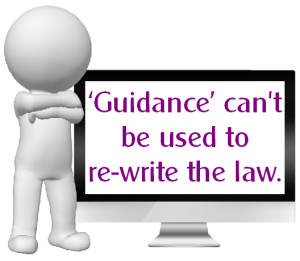 The industry needs some guidance from the regulators as to how unit pricing should be approached in various scenarios.  That won’t be easy, because ‘guidance’ can’t be used to re-write the law.  But telcos seem willing to approach unit pricing in the right spirit, so if the true spirit and intent of the TCP Code can be explained more thoroughly and consistently, we may see the fullest possible benefits of the new rules.

A telco lawyer with a truckload of experience
View all posts by Peter Moon →
This entry was posted in Advertising, Criticising the Code, Unit Pricing Rules and tagged ACMA, advertising, unit pricing. Bookmark the permalink.