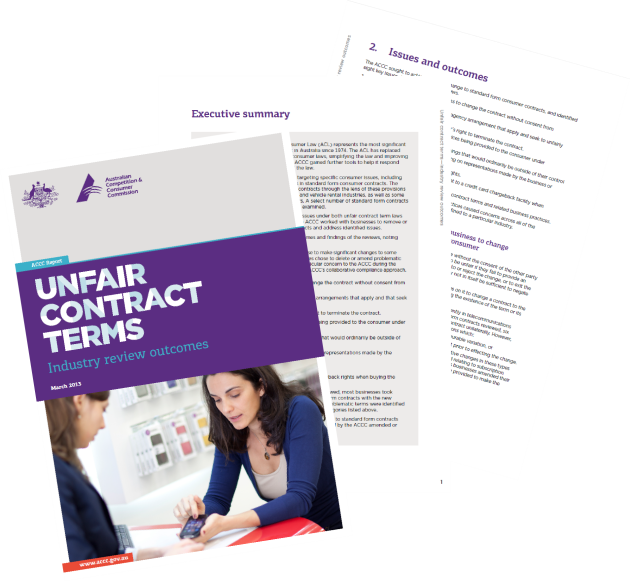 The Australian Competition and Consumer Commission has changed into enforcement gear regarding the anti-unfair contract terms rules in the Australian Consumer Law.  Not only do the rules apply to telcos as part of the general law, but clause 4.5.3 of the TCP Code also requires that ‘a Supplier will not include terms which would be Unfair in its Standard Form Customer Contracts under the law.’  So these kinds of terms breach both the Code and the ACL.

So service providers need to be aware of ACCC’s new drive to delete unfair terms in telco contracts.

The Australian Competition and Consumer Commission has announced that it is switching from a ‘compliance emphasis’ to ‘enforcement’ regarding unfair contract terms in standard form consumer contracts.

We’ve had an unfair contract terms law for a while

Australia has had a national law against unfair contract terms since 1 July 2010.  Before that, only Victoria had such a law.

In March 2013, ACCC released a report about several months of investigations it had undertaken into targeted industries, including telecommunications.

It identified a number of kinds of term that it specifically wants eradicated, and it is willing to take court action to achieve that outcome.

The good news is that the law only applies to B2C contracts.  B2B contracts are not affected.

The terms that are particularly relevant to telcos are:

ACCC is not saying that it does not care about other potentially unfair terms.  It is saying that these have been identified as particular problems right now, so they are getting special attention.

When a term is considered unfair – the tests

These kinds of terms are not automatically unfair, but only if three tests are met:

A term is more likely to be considered unfair if it is not:

Here are some important extracts from ACCC’s report.

Unilateral amendment rights are candidates for unfairness.   Note that TPG is actually named. 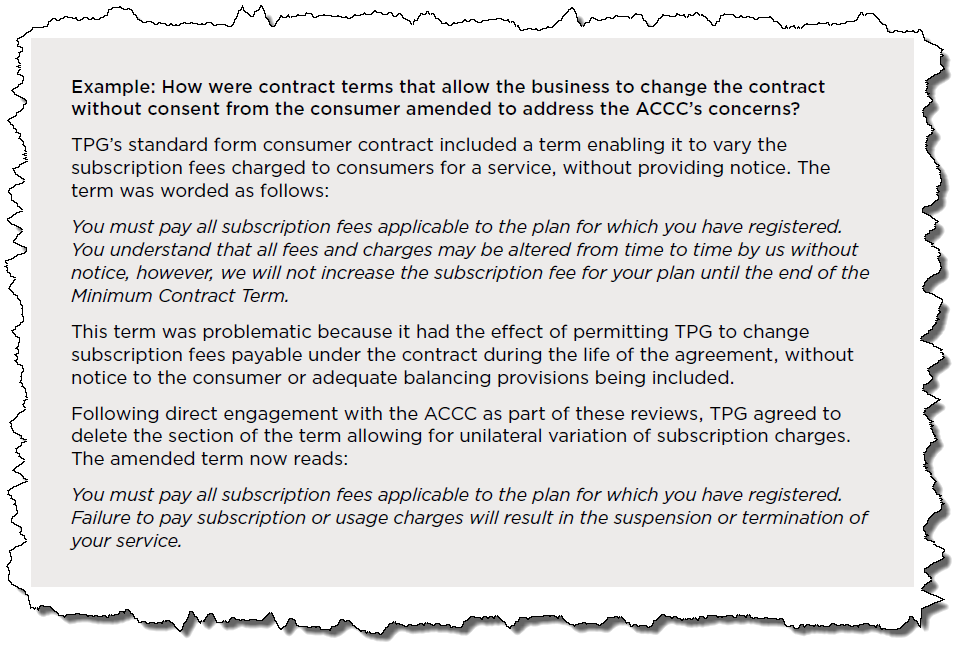 One-sided termination rights are another area of ACCC interest

And termination can be suspect from another perspective. 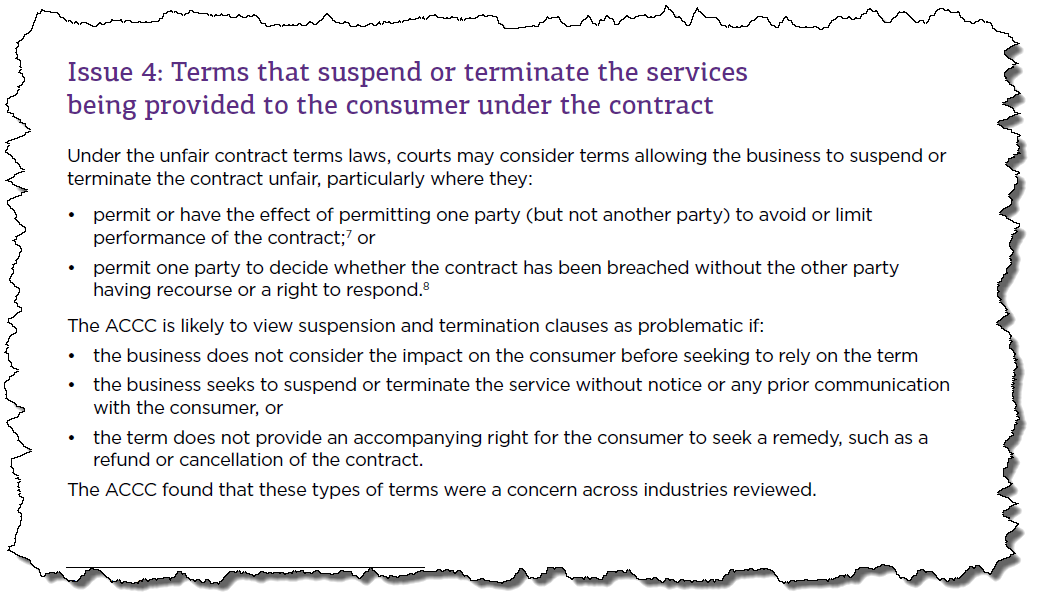 Some examples of changes required by ACCC 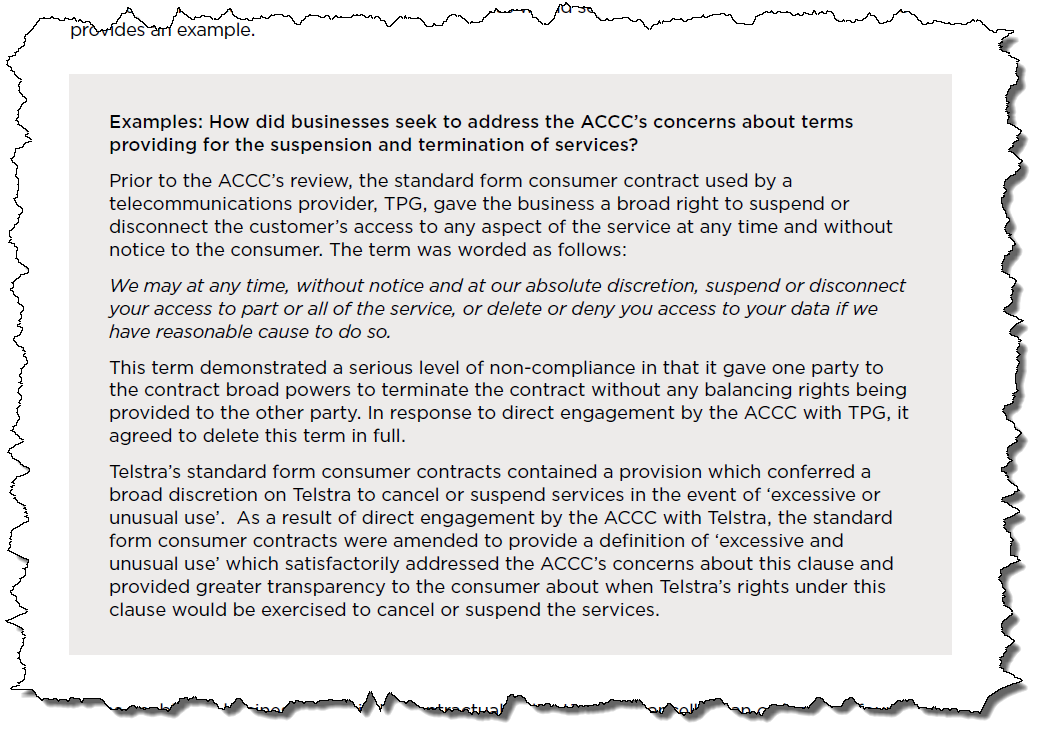 And requiring customers to do the impossible is also suspect 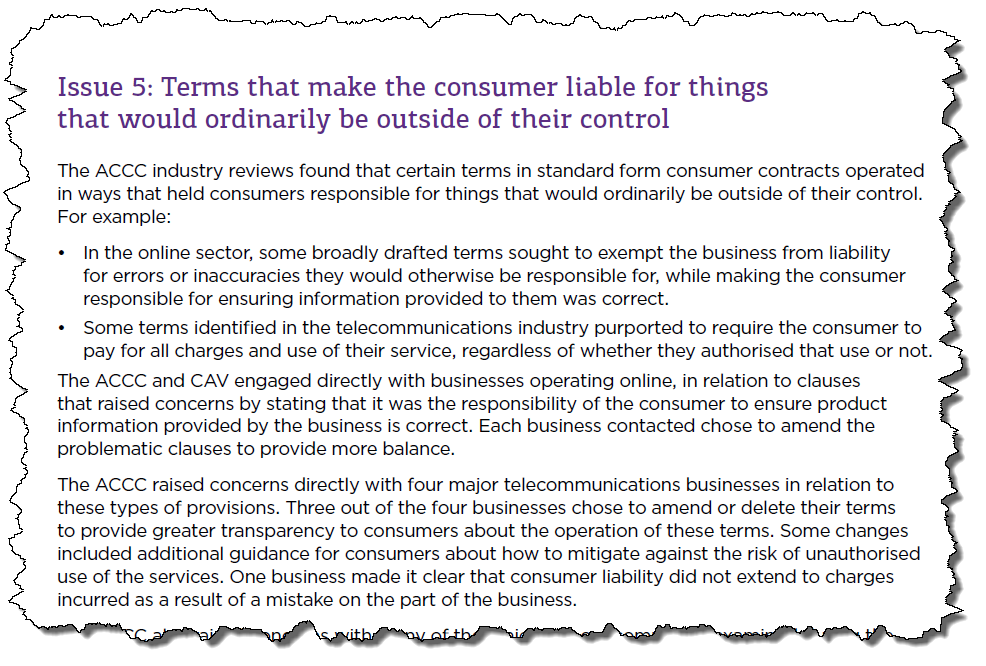 ACCC’s strategy has been used before

Notice that TPG and Telstra have been named in the report, as telcos that amended their documents when pressured by ACCC.  This is a deliberate strategy:  By demonstrating that big players were not prepared to take it on, ACCC considers that others will be more likely to fall into line.  We’re all supposed to notice that TPG rolled over.

We had to reach this point, some day

Since the Victorian unfair contracts law was transformed into a national law, there has been education but very little enforcement activity.  There was never any doubt that ACCC would draw battle lines at some point.

What telcos need to do

We call on all businesses to consider the terms and conditions of their own standard form contracts in light of the ACCC’s findings, and to make changes where necessary to ensure their contract terms are compliant.

Telcos need to review your standard form agreements and list any clauses that are candidates for unfairness.  Then you need to pass them through the tests above.  If you decide any clauses are risky, you need to consider whether to change or delete them.

This applies even where a lawyer wrote your terms

That’s because the law, and ACCC’s approach, are not static.  They change over time.  To ‘keep in the middle lane’ you need to steer as the road bends.  Now that ACCC has identified specific kinds of terms for special attention, it makes sense to give them attention before ACCC does.

A telco lawyer with a truckload of experience
View all posts by Peter Moon →
This entry was posted in Unfair Contract Terms and tagged ACCC, ACL, contracts, unfair. Bookmark the permalink.