TCP Code Unit Pricing: Will the evidence validate it? 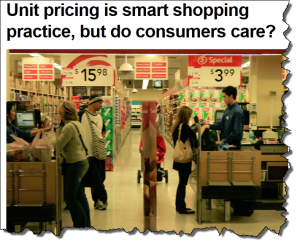 Let’s get the obvious objection out of the way early: phone plans aren’t groceries. Fair enough. But we have no closer a unit pricing example to learn from, and precious little expert analysis went into the telco model’s design. The least we can do is keep an eye on the findings in relation to groceries.

Under the title ‘Unit pricing is smart shopping practice, but do consumers care?’ South Australian Researcher in Consumer Behaviour Svetlana Bogomolova and Jordan Louviere, Executive Director of the Centre for the Study of Choice at Sydney’s University of Technology, released the results of their study into three key questions:

The study suggests that:

In other words, grocery unit pricing as currently implemented isn’t in fact effective, despite consumers approving of it and expressing positive opinions as to its value in their decision-making process.

So, what stops consumers from getting more use of the unit pricing information? The non-prominent location of the unit pricing on price signage, coupled with a very small font could be some of the “show stoppers”. Indeed, the information presented with such a lack of prominence might look like a disclaimer to a novice or a busy consumer. So, addressing its prominence on the price signage could be the first starting point in encouraging the use of unit pricing as the useful tool for grocery shopping. (Our emphasis)

And those are the very points TCPCode.com.au had in mind when we noted the variations in presentation of unit pricing data in a previous post.

Our take on it

Faced with a simpler problem, there’s now some evidence that the grocery regulators missed their mark.  Telco unit pricing is still new, and stakeholders still have room to assess and address how to implement it such that researchers won’t be saying in a few years that it was a nice idea that looked good to consumers but delivered no real benefits.

TCPCode.com.au thinks that Bogomolova and Louviere’s musings about prominence in grocery unit pricing, and whether ‘lack of prominence might look like a disclaimer’ and that ‘addressing its prominence on the price signage could be the first starting point in encouraging the use of unit pricing as the useful tool’ are also right on the money when it comes to telco unit pricing.

A telco lawyer with a truckload of experience
View all posts by Peter Moon →
This entry was posted in Advertising, Criticising the Code, Unit Pricing Rules and tagged text advertising, unit pricing. Bookmark the permalink.